This transverse bamboo flute from India has only recently begun to be used in classical Indian music and even more recently been used in cross over projects with western musicians. This flute is also known as algoza, bansi, kolalu, kolavi, kukhl, murali, nar, pava, pillankuzhal, pillangrovi, pulangoil, vanu, and vamsi. Three of my favorite players of this instrument performing North Indian Classical music are Hari Prasad Charausia, G. S. Sachdev, and Steve Gorn. 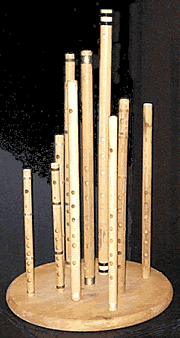 H. Charausia has also recorded with western musicians such as guitarist John Mclaughlin and saxophonist Jan Garbarek. Check out all three of these gentlemen with Tabla player Zakir Hussain on their CD "Making Music".

Unlike western metal flutes there are no lip plates or mechanisms such as keys. These flutes have six to eight finger holes in addition to the mouth hole. Half steps and microtones are played by partially covering the appropriate finger hole. They come in varying lengths resulting in varying pitch centers and ranges.

These particular flutes were made in India (I), San Francisco (SF) and Pakistan (P). The Indian and San Franciscan flutes are listed with their pitch when the first three holes are closed. The lowest note would be a fourth below. The Pakistani flutes are referenced with the lowest note. From left to right : (P) C,B, A, DD (low), (SF) A, (I) G, E, (SF) C, (P) EE, FF. They range in size from 13 1/4" (C Pakistani) to 2' 4 3/4" (E Bansuri) and have a range of slightly more than two octaves.

Hear the Bansuri on 'Desert Oasis' from 'Lake Melva Meditation', 'Bop-Ras' and 'Dhyana' from 'Svadharma', 'Bamboo' from 'bamboo dynasty', 'Dhayana' from 'Sa Ta Na Ma', and cuts from 'Riversticks: The Ferryman's Release'.

Read a brief history of the Bansuri and it's prominent players.